From centuries, man has tried to predict the nature and its course. Unfortunately, he has failed badly, even with technologically advanced systems. Nature has a very peculiar course of its own. Now, it can be a sunny nice day and the other second, an earthquake hits, leaving only ruins. A thriving city now can be turned into ashes and ruins, within minutes. This is the mysterious side of nature everyone dares to see. By categorizing, as per the level of destruction, here is the ten most deadly outrages of nature.

Avalanches are simply known as huge rock or snow mass, sliding down through the slopes of mountain. It can be caused by many things like earthquake or sudden pressure on any cracks in the snow glaciers, or stormy weather. This can cause huge damage to the hill cities and massive death tolls. Sometimes, the large rock pills moving down the sliding mountains combine with snow and increase the mass rapidly. Even the snow, combining with the air, makes cloudy effects, increasing the overall strength of the disaster. Wildfires, in some cases, cannot be considered a natural calamity, whenever it is produced, due to the carelessness of mankind. But in other cases, like volcanic eruptions or lightening, or pyroclastic clouds from active volcanoes, wildfires can happen too; mostly affecting people residing in rural areas and wildlife. Leaving huge vegetation burnt, wildfires also leave the air polluted with excess amount of carbon dioxide and carbon mono-oxide gases. Also, the ember attack is as deadly as the wildfire itself. The flying embers can burn down buildings and anything that comes its way. Landslides can easily be described as sudden collapse of the ground we are standing on. It happens very sudden and very fast. A huge locality can be swept away, within a minute, without leaving a trace behind. This can happen due to massive earthquake or the sudden displacement of plates or volcanic eruption. Sometimes, heavy rainfall can cause soil to loosen, causing a mudslide and collapse of ground. Other than lives loss, even a short period of drought can cause huge problems for local and national economies. Drought is defined as: the deficiency of water, in a certain region, for an extended time period of months, even years. This happens if the region does not receive enough rainfall throughout the year. The impact of droughts is deadly, for the ecosystem, harvesting and agriculture and overall region. It can last for months, even years. 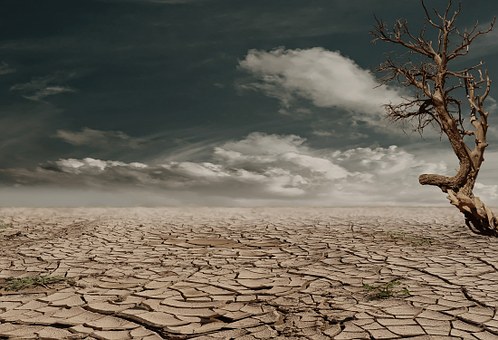 Considered as a deadly natural disaster in a limited area, these tornados are nothing but rotating air columns, moving at a speed of 80 to 500 kilometres per hour or more. Mostly, tornados occur one at a time, but sometimes breakout of more than one tornado in one or simultaneous areas, where thunderstorms have developed. The places where tornados hit, turn into ruins, after it has past. These are the regional names of the same cyclonic storms, generated over the oceans and seas, due to air pressure difference between and land and oceans. The Coriolis force helps the storm to get a spinning effect. When the spinning sir mass gains wind speed, more than 100 kilometres per hour, then it is known as a cyclone. These spinning storms are turned into Hurricanes, in the Atlantic Ocean and eastern Pacific Ocean. They are known as Cyclones in Indian Ocean and Typhoons in western Pacific Ocean. Commonly mistaken as large tidal waves, tsunamis are the collective series of larger waves from a huge water body like ocean. It can be the aftermath of earthquakes, volcanic eruption, underwater landslide, plate movement above or below water, or geographical changes, even nuclear explosions. There are instances that an entire country or a large part of it has been grasped by the ocean, while a tsunami has hit. Caused due to excess rainfall, the flood can wipe out cities and localities and cause major troubles, due to water logging for long time. The capacity of water bodies like river and lakes, exceeds and overflows nearby areas. The aftermath is the deadly diseases and unavailability of fresh drinking water, due to water logging. When an active volcano erupts, it spreads lava and deadly gases into the air. The type of eruption varies from daily small amount eruption, to sudden massive eruptions of more than thousand cubic kilometers of materials. Some of these cause pyroclastic clouds, with high temperature and ashes that can cover large areas very fast. The massive shaking and displacement of ground is termed as earthquakes. This is generated by sudden energy release between the levels of earth crust, that turns into seismic waves. In seismography, the level of deadly earthquake is referred between Richter scale levels 3 to 7, above which is unimaginably deadly. Next Post Top 10 Companies That Shut Their Doors in 2017